Home » The EDGEucator » Civility Does Not Equal Bi-partisanship
Fri14

Civility Does Not Equal Bi-partisanship 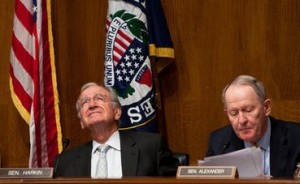 As much as we might hope, civility in the US Senate does not necessarily lead to bi-partisan agreement.  That’s what I was thinking about at the conclusion of the Senate HELP Committee‘s mark-up of the  Strengthening America’s School Act this past week. The concluding statements by Senators Alexander (R-TN) and Harkin (D-IA) were full of all sorts of niceties about the civility of the Committee members during the two-day debate over a wide range of contentious wedge issues in federal K12 education policy… It was polite politics at its best.

But the comity did not mitigate the deep divides in ideology between the two parties.   Virtually every vote on the  long list of the amendments was starkly along party lines. The deep divide starts with radically different visions of the federal role in education between the two parties  and ripples through nearly every issue big and small in the Elementary and Secondary Education Act (ESEA).  Check out this Ed Week  excellent summary analysis of the key issues.

So I agree with the conventional wisdom around town that the chances of moving an ESEA reauthorization bill this year are slim to none. The partisan political paralysis — however polite — just won’t allow the long over due act to be amended any time soon.  But let’s hope that the civility displayed on the HELP Committee will eventually prevail and lead the leaders to the negotiating table … just as it has happened in previous iterations of ESEA over the past 40 years.